I was contacted by Random House Publishing Australia a few years back to value a medallion. They told me that they wanted to run a competition in conjunction with the launch of the book Brisingr by Christopher Paolini. The winning prize would be the medallion. I asked them to see it and they quickly informed me that it had not yet been designed. “Ok, who will design it?” I asked. Their response was “you are” and it had to be valued at $10,000 because that was the advertised value of the competition.

I was contacted through a Google search and after a 10 min phone conversation I had secured a $10,000 order. Isn’t the Internet wonderful I said to myself rubbing my hands in glee. The reality soon hit me that I had no idea how to sculpt the medallion. I only had the book cover dragon as a reference and I had never sculpted anything in my life before. Anyway, necessity is the mother of invention and I eventually figured out how to do it. The end result was a paper weight chunk of 18ct solid gold.

The winner was an 11 year old boy from the Central Coast north of Sydney. I often wonder how much that medallion would be worth now. The price of gold has skyrocketed in recent years not to mention the collector’s value of such a medallion. 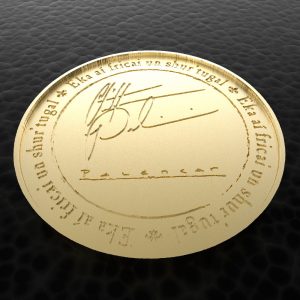